UniPhi 14 Survey Results Are Out!

A few weeks ago, we sent a survey asking you, our users, what you thought of the current features and modules of UniPhi 13 and what you would like to see in the next update of UniPhi 14. We had a great number of responses and are extremely grateful to all who participated. It has allowed us to gather a lot of insight into what is and isn’t working for our user base, what ideas they have for the future of the software and where we should go from here.

And so, without further ado (we won’t keep you in suspense any longer), here are the results of the survey.

Current Modules
The purpose of the first part of the survey was to find out what users thought of the current modules and gain some insight into their experience using UniPhi 13. 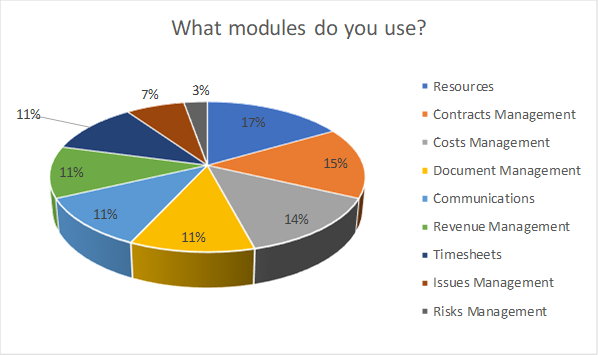 This linked in with the most liked modules, being Contracts Management, Costs Management and Resources, potentially being the result of why they are the most used or vice versa. 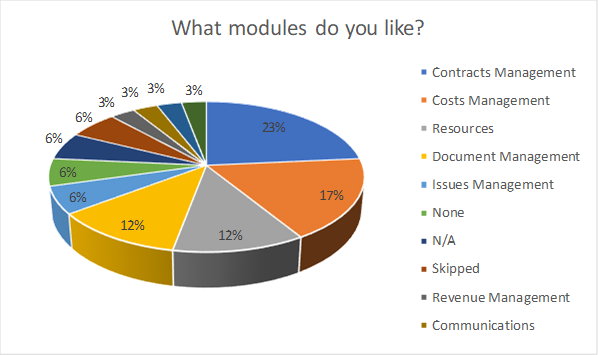 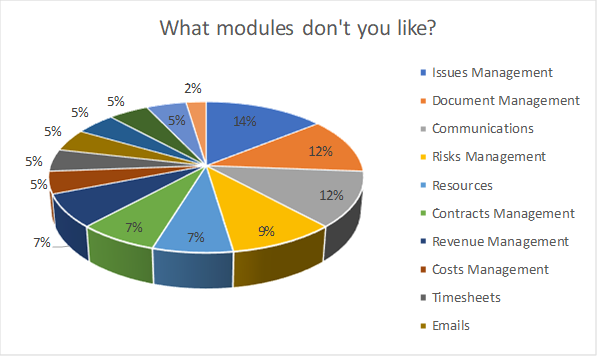 Further improvements suggested in the comments, were those regarding outlook, with users wanting improved functionality particularly with regards to saving emails as issues, enhanced reports and dashboard charts and graphs, as well as more training around auto phasing to make it appear less black box and mysterious.

The rate of response of the system was however not found too slow with the majority saying so. 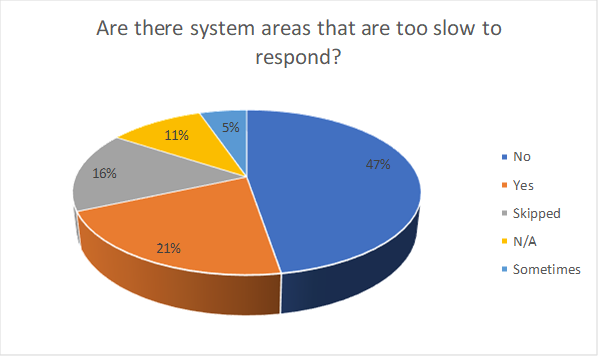 New and Improved Features
This leads us to the second half of the survey, which was designed to ask users what features they would like to see in the update. Respondents were therefore offered a predetermined list of options to pick from of potential future updates.

It comes as no surprise, given the previous comments that enhanced outlook integration was the most sought-after feature with 68% of respondents opting for it. This was closely followed by mobile optimization (62%) and new visualization dashboard, including design your own dashboards embedded in the application (56%).

Finally, we were interested in finding out what other ideas and suggestions users might have for the update.  There were a lot of great suggestions for new features in UniPhi 14, some of which were:

Where to from here?
Now that we’ve gathered all your responses, had a chance to learn about what you do and don’t like and what you’d like to see in UniPhi, we can get cracking on UniPhi 14.

We will be writing an update blog post in late May and in June we will start presenting the new features with a set to be released date in July/August.

Posted by UniPhi Software at 3:11 pm No comments:

In exciting news, UniPhi has been the recipient of two awards and a glowing review from FinancesOnline.

FinancesOnline, which is an independent software review platform that aims to help business and software vendors find their best fit, recently reviewed us on their site. They gave us a fantastic review for our comprehensive project portfolio management tools, rating us an 8 out of 10, including us in their list of project management tools, and ultimately awarded us the Great User Experience award and the Rising Star award for 2018.

A little snippet of what they said about us:

“Construction consultants (e.g. engineers, and architects) often struggle to integrate the completion of deliverables with the value assigned to that deliverable on the project. This can lead to cost overruns. The causes of this are the dissociation of delivery of work to the capturing of time on the job.

UniPhi integrates these two elements through three pieces of functionality, issues collaboration, contract deliverables and timesheets to contract deliverables. Issues collaboration ensures rapid progress on delivery, timesheets have an “hours remaining” function which allows for earned value to be captured and therefore warning project managers that the project may be running over time even when progress is at 5%.”

We’re also proud to be highlighted in their article detailing the purpose of project management. And so, with a few more awards under our belt, we can confidently begin working on UniPhi 14.

To find out what else FinancesOnline had to say about UniPhi, visit:
https://reviews.financesonline.com/p/uniphi/#review

Posted by UniPhi Software at 11:36 am No comments: